One question that Junior Developers frequently ask me is "How do you debug?".

I have a reasonably good track record on debugging problems, quite often on systems where I have zero prior knowledge. The general rules I follow for debugging other people's programs are:

I recently had a thorny issue on some BLE Firmware where I failed to follow my own rules, and demonstrated why they work! We were working on Nordic's new nRF52832 chipset, using both Nordic nRF52 dev board, and Rigado's BMD-300 Evaluation Board. 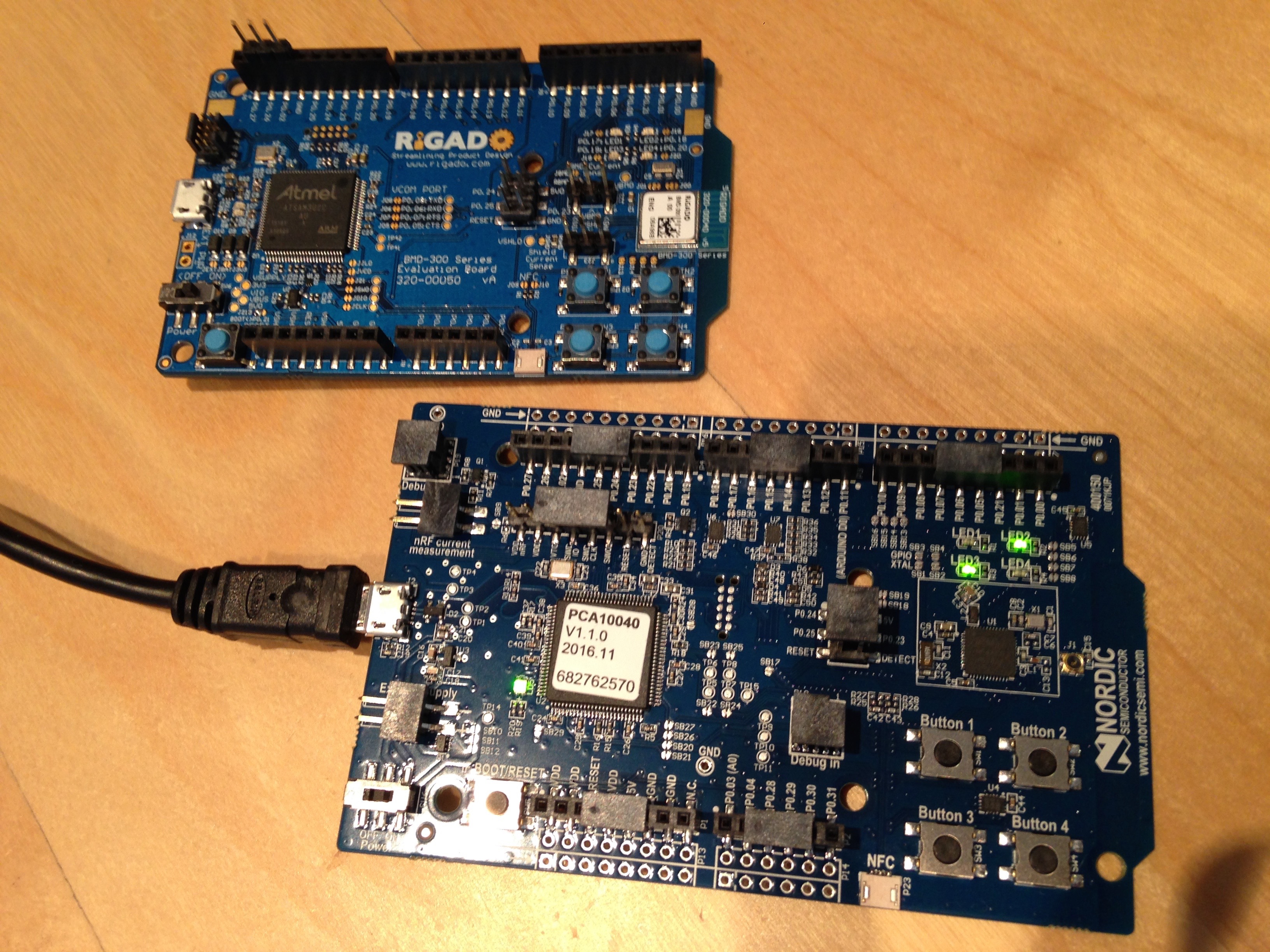 For some reason the firmware I had written was drawing far far too much current in System-On Sleep mode, when it should have been essentially unobservable on the scope I was using.

Excess current draw - CurB is the sleep current, which should be essentially zero.

Applying my third rule, I rapidly established that a simple cut-down version of my program which broadcast adverts but nothing else did not draw excess current.

There were two clear possibilities. Either it was actually leaking huge amounts of current when asleep, or it wasn't actually going to sleep. Either case was triggered by something in my program.

I immediately had a few suspicions:

I had a look in the SDK examples, and found a program that used the SAADC. It worked fine. I extended it to use the radio notification callback. It worked fine. I cut-down my program and found the function that was causing the problem, narrowing down the issue to a particular line of code (more on that later) which seemed fairly innocuous - it just wrote to a block of memory outside the stack.

I had, by this stage, unwittingly broken my first and second rules of debugging. And once the second rule goes wrong, everything else is suspect. I then wasted some time trying to establish why writing to memory should cause a current leak.

The section of code that confused me

When I started debugging the problem, I forgot to turn off optimisations in the compiler. That meant the code I was looking at was not necessarily the code that was being run, which broke my First Rule. In particular, some floating point operations I had executed a few lines higher were only actually compiled in if the result was used.

I then broke my Rules because I decided not to ask anyone for help, on the grounds that this problem related to a development environment that no one else in the office knew anything about. While this was true, that only meant that most likely no one could help me fix the problem. It did not mean that no one could help me diagnose the problem by spending five minutes sanity checking my own diagnosis process. If I had even then proved to myself that the code I was looking at was being run, I would have been okay. But I didn't. However, I was starting to not trust the diagnosis any more.

However, I did get one thing right. Instead of going back to the office after dinner to work on the problem (largely, I admit, because I couldn't find my office keys, and needed to use the oscilliscope) I decided to clean up my test cases a bit, and then got an early night (Rule 4). The next morning, working with a fresh mind (this is a partially valid application of rule 1!) I realised my error in not disabling optimisations (Rule 2), and rapidly found the problem.

The eventual problem turned out to be complex - but once I had the diagnosis, finding a fix was actually quite quick. I turned off optimisations, and discovered that the offending piece of code was actually the floating point instructions. A swift search for "nRF52 FPU sleep" in the Nordic dev forums brought up a related issue as the first link. It wasn't initially clear to me how this related to my problem, but the important thing was the fix provided worked.

After another half hour of investigation, I realised that my case was actually the same as that discussed in a forum query. There, the divide by zero triggered the DZC bit in the FPU Status Control Register.. In my case, a conversion from an integer to a float triggered the IXC bit which indicates an Inexact Floating Point Exception.

Both exceptions triggered an FPU IRQ that needed to be cleared before the CPU would sleep, therefore explaining my current leak. A spot more googling showed that the issue was actually documented by Nordic - only in the SDK documentation rather than the soft device documentation because it wasn't actually a bug, it was merely the documented way that things worked. 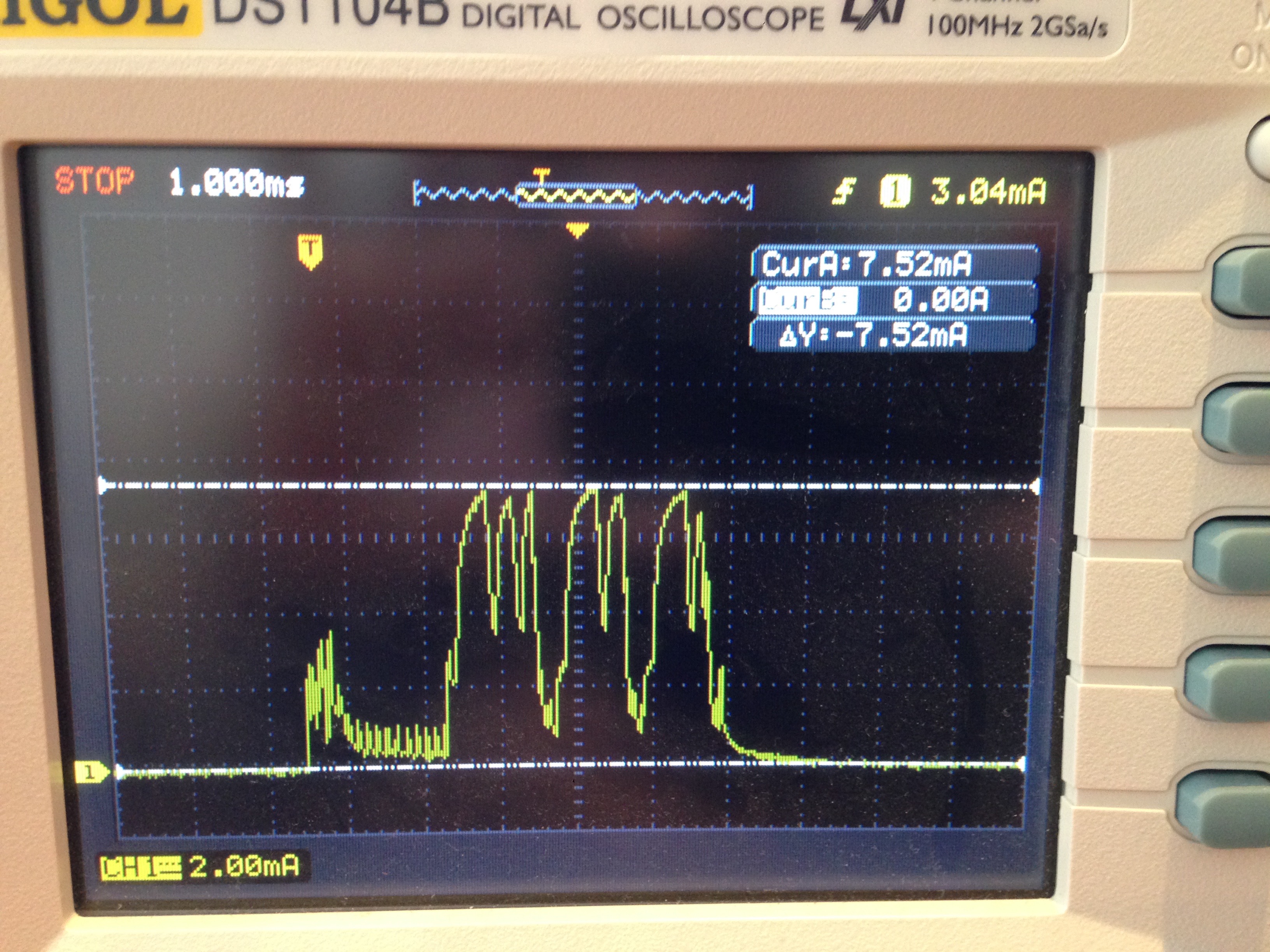 The new oscilliscope trace - note that CurB (sleep current) is now zero, as closely as I can measure.

So what do we conclude? My rules would have worked - if only I had applied them properly!