The roundup for the released version of 8.1 is available in Part 3.

In Part 1 I discussed how NSURLCache is broken on iOS 8, and promised some source code. The source code is available here, and it is worth taking a closer look at some of the results.

The first thing to do is to edit the configuration section in AppDelegate.h and enter the URL of a suitable image to download. I have deliberately not specified an image here, because I do not want to send high traffic to any particular site. The URL specified will not work from outside the Airsource network, so do not try it!

Then, build the code and run it on an iOS 7.1 device. If you do not have a suitable device, then use an iOS 7.1 simulator. The results are the same. I have not bothered creating a suitable Default-568h.png, so you will see top and bottom black bands.

There are four things you can do from this screen. 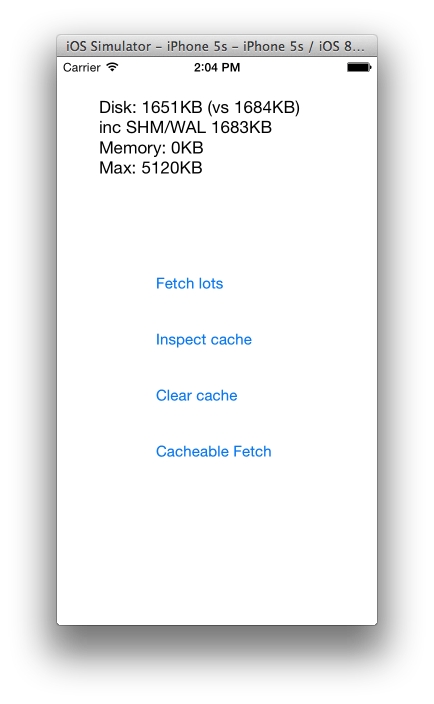 The success state of fetches (whether cached or otherwise) will be shown at the bottom of the screen, while the top of the screen shows the latest stats on the cache - actual size (determined by inspecting the actual files stored), size reported by NSURLCache:currentDiskUsage, and the maximum size of cache allowable (NSURLCache:diskCapacity). iOS 7 ignores the sizes of files Cache.db-shm, and Cache.db-wal when reporting the cache size, while iOS 8.1 does not, so I display both exclusive and inclusive sizes.

On startup, you will note that the size of the cache on iOS 7 is non-zero. This is because the database file Cache.db has been initialised by the operation system, and although it has no data rows, it still takes space.

Now execute a few fetches (use the Fetch button). You should see the cache size increase, assuming your fetches succeed. The memory cache will be much larger than the disk cache, because NSURLCache doesn't move things into store until it needs to. Hit "Inspect cache" after a few seconds if the size has not updated.

Next, restart the application. The reason for this is that we included the code

On restart, you will see that the cache has NOT been cleared. Moreover, everything that was in memory has been moved into store. Clearly it does not matter how the application exits - the cache can be treated as persistent. Clearly also, clearing the cache at startup does not work on iOS 7.

An important test is to check that the cache is read from. Hit "Cacheable Fetch". Then hit it again. You should see, in the logs on XCode, the line "Retrieved

Finally, I noticed that a report that removeCachedResponseForRequest: has no effect. My own experimentation confirmed this - on both iOS 8, and 8.1. I found that removeCachedResponsesSinceData: did work - a new API for iOS 8 that has yet to make it into the documentation (it is present in the API diffs for iOS 8), but I fail to see what use this API is - surely I want to remove cached responses from before a particular date, not afterwards! I have not added test code for this yet, but I have noted the results below.

Results from iOS 7.1.2 (device or simulator)

Repeat the tests on a iOS 8.0.x device (simulator not tested), and you should get the following results:

Repeat the tests on an iOS 8.1 beta device or simulator, and you should get the following results:

There are two more potentially significant issue that I discovered while doing this research. The minimum disk cache capacity on iOS 8 appears to be 5 megabytes, determined by experimentation. When I set the disk capacity below that value, no data was created on the file system, nor was any memory used. No such issues showed up on iOS 7 for small cache sizes.

This has a potentially serious consequence - if a developer set the size of the cache explicitly on iOS 7 to a value smaller than 5 megabytes, they will find that the cache is not used at all (even if present on device) on iOS 8. The cache will instantiate properly - and storeCachedResponse:forRequest: will be called - but nothing will be stored - and any existing data present on the file system from when the app was used with iOS 7 will neither be retrieved nor cleared.